The Chapel of St Albert the Great

The History and Architecture of our Buildings

In 1761 an enterprising builder and town planner named James Brown paid £1200 for 26 acres for feuing to the south of the Flodden Wall. This land which had been part of the grounds of Ross House (later Bristo House), sloped gently down to the Meadows with a view across to the Pentlands.  Building began on the north row of the Square in 1766.  By 1779 the west and east sides had been completed and the south side by 1785.  James Brown oversaw the whole project himself. The stonemason was Michael Nasmyth, whose grandson, Alexander, painted the famous portrait of Burns. In his autobiography, Alexander singles out the houses in George Square as examples of the finest craftsmanship of his grandfather, citing “elegance and sustainability” as his aim. The stone was durable and some of it, if not all, came from the quarry at Craigmillar.  In the excavations in the garden of 24 for the new chapel two stone wells were uncovered. In fact the first residents had no water supply but drew water from a well on the Meadows.  It was referred to as the Great Square, but the actual name was George’s Square, named after Brown’s brother and not the saint or the monarch! The Square had 61 houses, two of which, 23 and 24, now comprise St Albert’s Catholic Chaplaincy.  While number 25 is famous as the childhood home of Sir Walter Scott, 23 and 24 have also had some notable residents and guests.

The first proprietor of 23 George Square was Thomas Lockhart, Commissoner of Excise.  Boswell was a frequent visitor to his home and records in his diary that he had a hearty dinner here in 1780: “I drank porter and port and Madeira and a bottle of Claret, and wished for more.” In 1779 Thomas Lockhart built 23A as an extension across an access lane giving shelter from the strong winds from the west in the winter.  In the Nineteenth Century number 23 was subdivided and the top two floors became a separate address 23B. Among its residents were the medical student Arthur Conan Doyle and in the 20th Century the architect Patrick Nuttgens CBE.

Number 24 was for decades the home of a circle of officers in the service of the East India Company.
In 1867 number 24 was purchased by David Scott Moncrieff. It was he who built the bay window in the large and elegant drawing room which extended to the full width of the house.  With the building of the Royal Infirmary on the other side of Middle Meadow Walk he planted trees at the bottom of the garden as he feared the Infirmary would prove to be an eyesore.  In 1931 the Dominican friars purchased 24 George Square and were appointed as Catholic Chaplains to the students and staff at the University of Edinburgh and to the Catholic Professional Guilds of the City.  The location was excellent for this ministry and the drawing room was large enough to serve as the Chapel.  One of the first friars, Aelred Whittaker was a noted sculptor and had his workshop in the garden.  His relief of St Albert is pictured here. 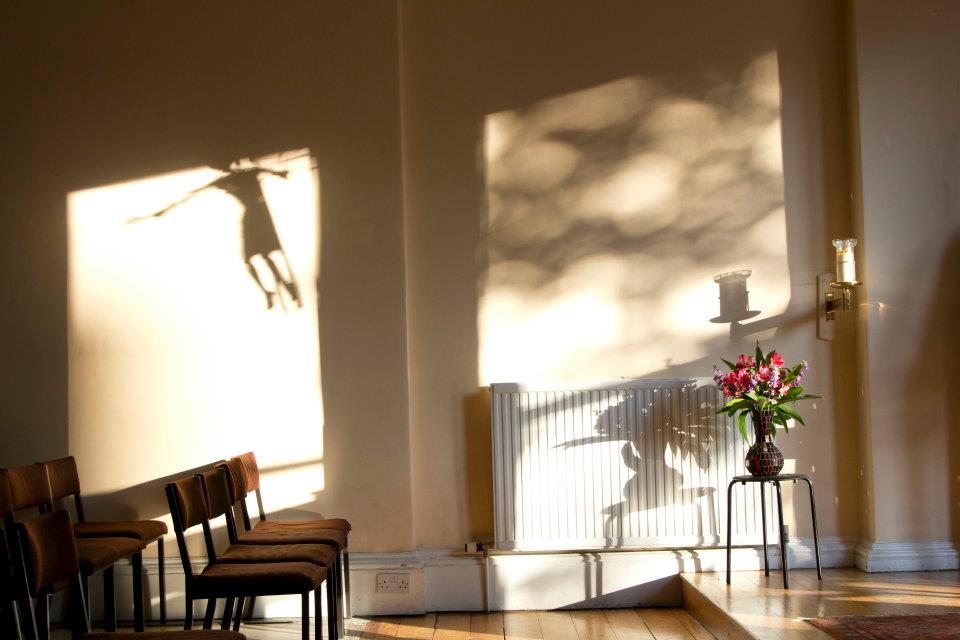 The upstairs drawing room in number 24 which served as a chapel from 1931 until 2012 is a beautiful light-filled room with a high ceiling. The bay window looks directly into the branches of the mature sycamore tree at the bottom of the garden. To those in the chapel the tree registered the play of sunlight, the movement of the wind, the rain and the snow and the passage of the seasons.  It became known as “the upper room”.   By 2005 this upstairs chapel was too small for the numbers attending, there were structural issues and obviously there was no disabled access.  The solution was to build a new chapel in the garden.

From the start it was envisaged as a garden chapel with a strong connection to its garden context and to the copse of trees at the end.  The limited palate of materials, wood, glass, stone and corten steel, deliberately echoed the simplicity of the chapel upstairs.  Structural glass gives the illusion of an open space beyond the altar while the corten columns and masonry wall apertures create an appropriate balance between enclosure and openness for a space designed for liturgy, prayer and contemplation.  Whilst the altar and lectern are solid stone and fixed, the seating and the screens near the entrance allow for versatility of use.  In particular the screens serve to create a transitional zone between interior and exterior which is so important in a sacred space. The lighting, which is all low energy, is cleverly concealed in the paneling of the ceiling and the walls.   The oak roof structure contains engineered timbers fabricated from timber waste products. A sedum-covered roof provides insulation, reduces water discharge and provides a new habitat for garden wildlife. 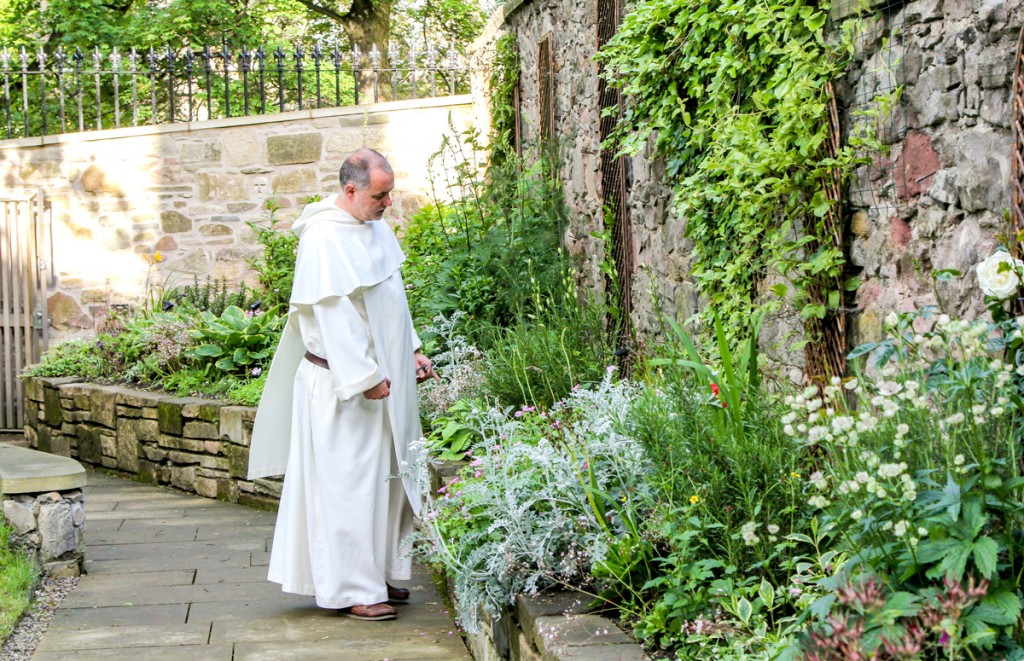 Wherever possible, materials from an old kitchen extension and the garden walls were reused to form the raised lawn, pathways and the raised bed.  The chapel opened in July 2012 and in October an initial planting scheme was devised.  Members of the regular congregation donated plants from their gardens.  The beds and the area to the rear of the chapel are a work in progress but to some extent a visitor might be persuaded that already the garden planting echoes the views of its Fourteenth Century patron St Albert the Great who while commenting on Aristotle wrote that a garden should have “a great diversity of medical and aromatic herbs, not only to delight the sense of smell by their perfume, but to refresh the sight by the variety of their flowers, and to cause admiration at their many forms in those who look at them” (from ‘De Vegetabilibus et Plantis‘). To date there are about 150 different species in the raised bed, including many of the herbs of which St Albert wrote.  You should be able to find hyssop, angelica, sorrel, lovage, fennel, sage, rosemary, verbena, mint, lemon balm, parsley, thyme, camomile, oregano, marjoram, chives and bay and more.