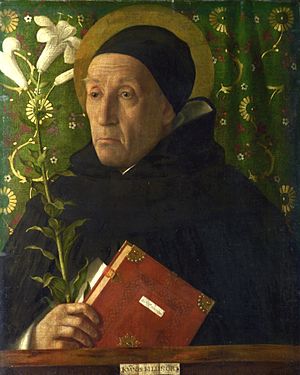 An inscription identifies this as a portrait of Fra Teodoro da Urbino, who is known to have been at the Dominican Priory in Venice in 1515 when this was painted. He is posed as St Dominic. The halo, the lily, the gospel book bearing the saint’s name, and even the far away look in his eyes all suggest that Fra Teodoro is posed as St Dominic.  At the time in Venice, artists would show saints  as  real people and not give them idealised features. The naturalism extends to the sitter but not the saint, because St Dominic died when he was 51 and he is usually shown as a younger man.  This is a much older man.  In 1515 Bellini himself was an old man and he would die the following year in 1516.  But, as is evident from this painting, he continued to paint and even adopted the new techniques and styles being developed by younger artists in the city.   Perhaps Bellini and his elderly sitter might have been making a deliberate statement about  how a Dominican vocation is lived out even in old age.  Look at the bushy eyebrows! Bellini, who was an old man himself, paints another old man, perhaps to remind the viewer that this old friar still makes Dominic present, not in spite of, but precisely because of, his  many years in the Order.  St Dominic, pray for us.