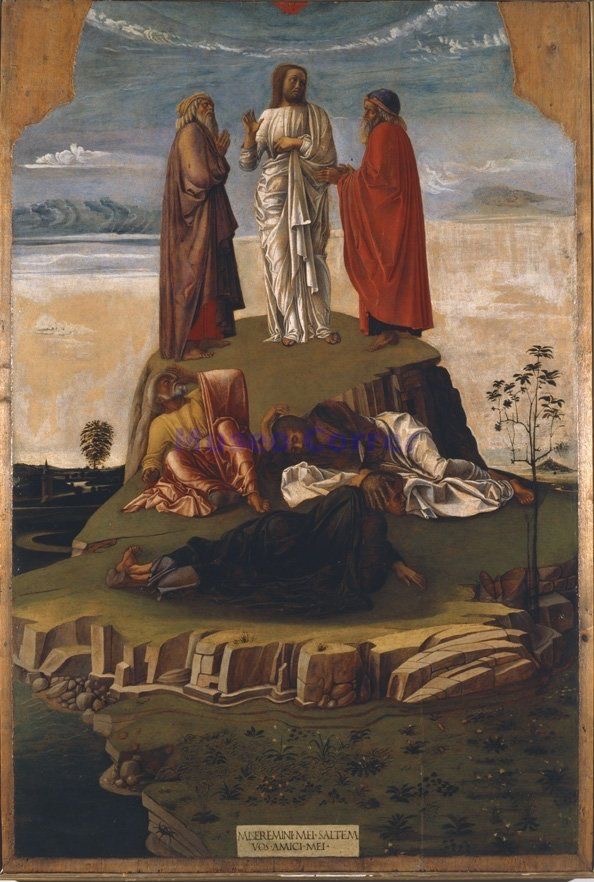 “The Transfiguration of Christ on Mount Tabor”, Giovanni Bellini, c. 1460-63,

The Feast of the Transfiguration originated with the dedication of the basilicas on Mount Tabor.  But in 1457 Pope Caliixtus III made it a universal feast of the Roman Calendar to commemorate the victory of Christian forces over the Ottoman at Belgrade  the year before.   Just a few years later, the young Bellini painted this work to form part of an altarpiece for a church in Venice.  The influence of his brother-in-law Mantegna is evident particularly in the exposed rock and the stiff garments and for centuries it was thought to be by Mantegna, but it isn’t.  With his characteristic subtlety, Bellini marks the distinction between the earthly and heavenly realms.  Below, the three apostles are seen against the green grass, whereas above the three figures in glory stand against a luminous sky.  On either side, there are glimpses of a landscape extending into the distance, but the rocky mount rises before us and draws the eye upwards to Christ, like a prayer rising heavenward.  The inscription at the bottom, is a quotation from the Book of Job, “Have pity on me, at least you my friends” (Job 19:21).   The verse in the Book of Job continues, ”for the hand of the Lord has struck me” . This verse along with the tree stump on the right, from which new growth is visible against the sky, suggest that Masses were to be offered at this altar for someone who had died of plague or in some other tragic  way.