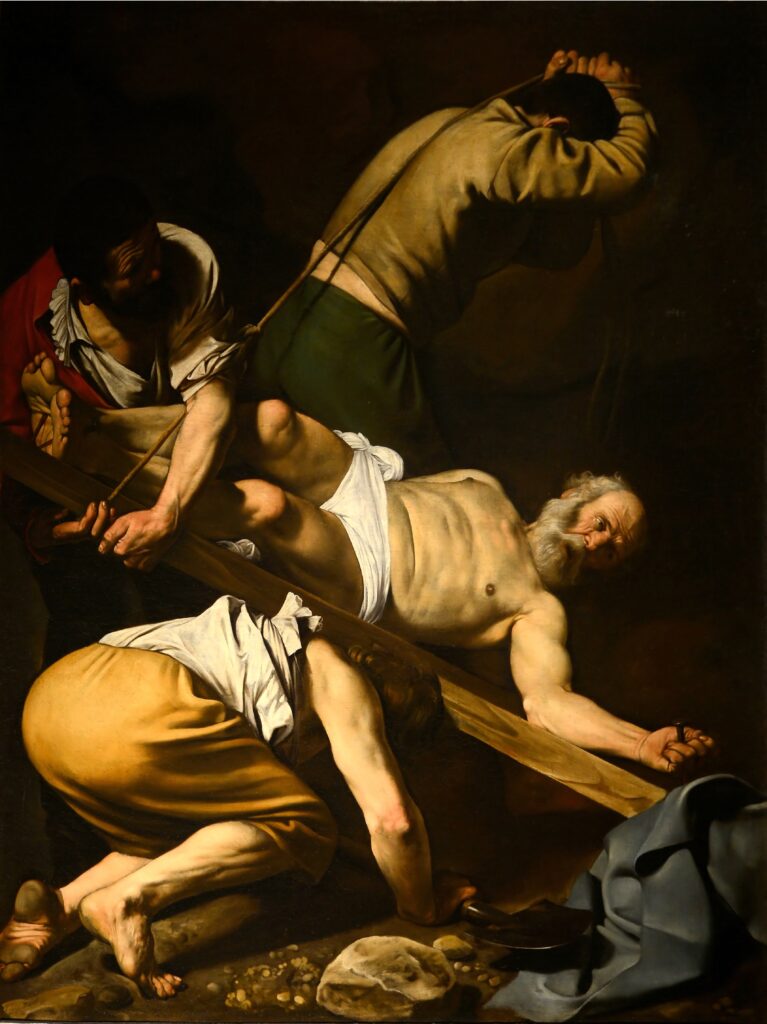 The men who are crucifying St Peter wear contemporary working clothes.  In 1602, it must have seemed as if St Peter’s martyrdom was taking place in some dark corner of contemporary Rome and someone has shone a light upon them.  The three executioners intent on their task and seem to ignore the light. We sense their indifference to the suffering of their victim. They might as well be lifting a stone or a pillar and not a living man.  We can see that St Peter’s stomach is clenched as if with a sharp intake of breath in response to searing pain. The painting is located on the lateral wall of a side-chapel and positioned so that St Peter is looking beyond the frame of the painting towards the chapel’s altar.  With characteristic realism, Caravaggio shows the saint straining to lift his head and torso to do so.  When Christ hung on the cross, there were witnesses. Here the viewer is the only witness.  What we see is a hideous act carried out under darkness, but  the mysterious light shows us that St Peter’s faith has not failed.  Caravaggio places a rock at the front in the centre to remind us that St Peter is the rock on which Christ promised to build his Church.  The first viewers of this painting would have been pilgrims entering the city of Rome where St Peter’s blood was shed. They would have noted the dirt clinging to the bare feet of the man on the left, because their own feet would have been just as dirty.  From Santa Maria del Popolo, the pilgrim route took them through the dusty streets of Rome to the very place where he died, asking as they went for his intercession, that Christ might forgive them their sins and strengthen their faith as once he had had done for the repentant St Peter.  On Tuesday we celebrate the Feast of the Chair of Peter.   St Peter pray for us!