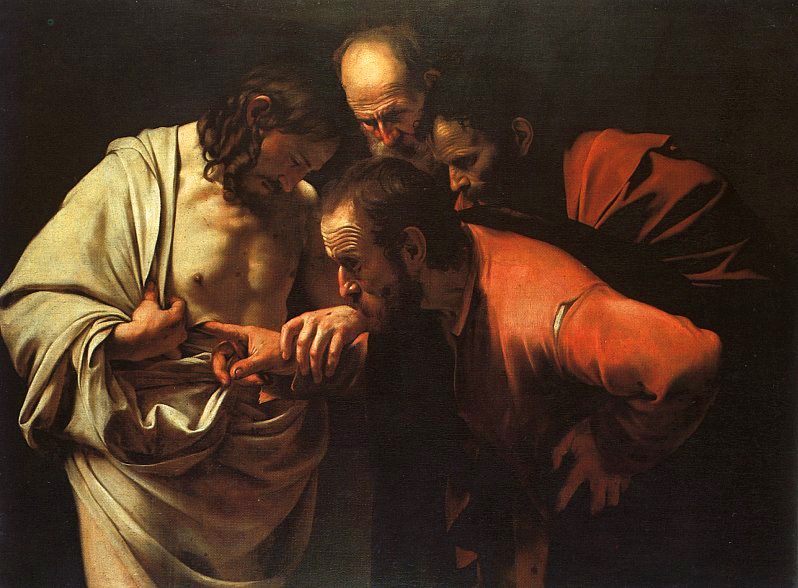 At first glance, it is hard not to be shocked at the sight of Thomas’ finger probing Christ’s wound.  And yet, the two other disciples show no sign of shock, but stare intently.  Christ’s gaze is focused on the wound too, but there is no suggestion of pain or discomfort on his face.  Caravaggio’s Risen Christ is indeed flesh and blood, and yet does not seem to feel the pain that you or I might were this wound ours.  The Risen Christ is shown as a young man with pale, unblemished skin.  His loosely worn garment looks classical.  It catches the light and suggesting his sovereign freedom.   His inclined head, with that lock of hair tucked behind his ear, is arguably one of the most beautiful images of the Risen Christ ever painted.  By contrast, the disciples are dressed in the contemporary clothing of the poor.  Their exposed skin is tough and weather beaten as you might expect of fishermen.  Their wrinkled foreheads and receding hair ages them.  Caravaggio situates the action in a triangle of light which emerges from the surrounding darkness. It is formed on the left by the torso of Christ, his hands, the hand of Thomas. and to the right his head and shoulder.  The rip in the shoulder of Thomas’s clothing is prominently positioned, so that we must notice it, and see the contrast with Christ’s flowing robe, or perhaps draw a parallel with the wound in Christ’s side.  In the shadow below this tear, Thomas rests his hand on his own side.   When the Risen Christ appeared to Thomas and the other disciples darkness had fallen. As in other works by Caravaggio, an almost theatrical light shines into the darkness symbolising faith in those upon whom it falls.  Although Thomas can feel Christ’s wound with his finger, it seems to me that he isn’t looking at his hand, or at Christ, or the wound.  As he feels with his hand he looks away towards the source of light, to the one who will enable him to declare Christ, “My Lord and my God”.  John’s Gospel doesn’t say that Thomas even touched, never mind probed, the wound, nor that the hand of Christ guided his finger into it.  But,  by and large, this is how Christian tradition has envisaged the scene.  It is not simply that the wound confirms the identity of Jesus, but that it reveals the self-sacrificing love that drove Christ to endure the agony of the cross.