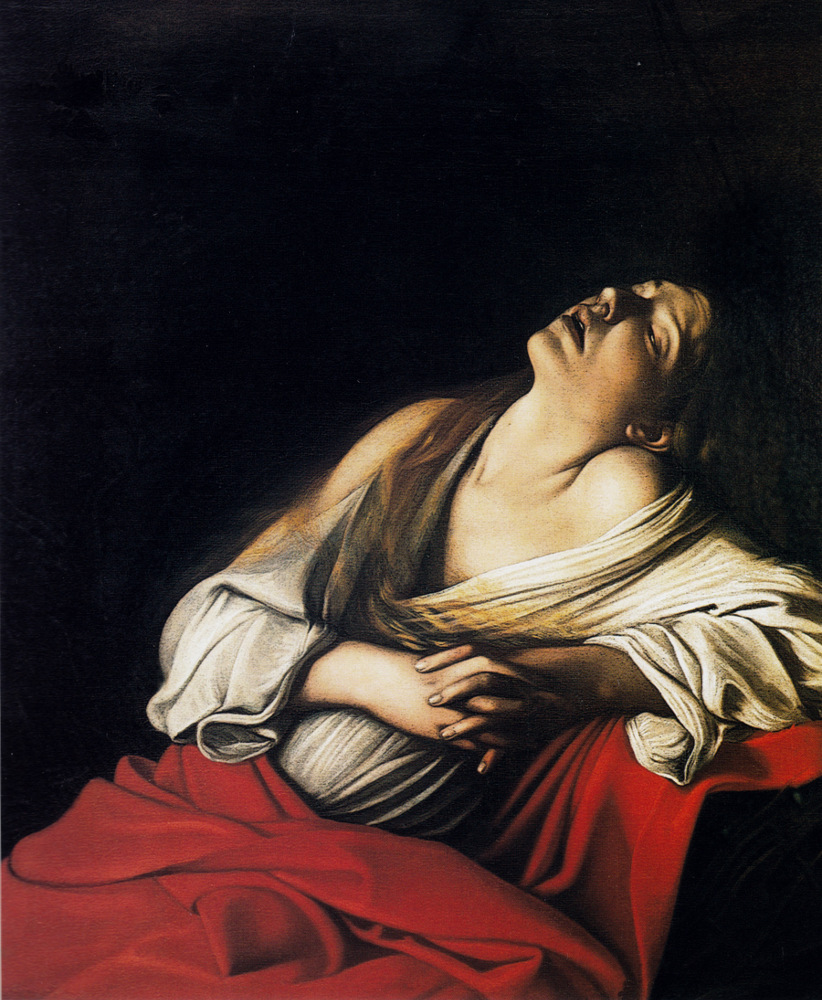 In the gospels, Mary Magdalene’s importance is primarily that of a witness to key events,  She is a witness to the crucifixion, to the burial of Jesus, to the empty tomb and to the Risen Christ.  In John’s Gospel, she is the first person to whom the Risen Christ appears and because it is she who first tells the other disciples “I have seen the Lord”,   she is known as the “apostle to the apostles”.  This is one reason why she is Patroness of the Order of Preachers.  However in a  sermon from Easter 591 Pope Gregory I conflated Mary Magdalene with Mary who was the sister of Martha and Lazarus, and also with the woman who anointed the feet of Jesus, who was known sinner  (Lk 7:36-50).   This association with sexual sin and repentance stuck. The tradition that that after the Ascension she spent days doing penance in the wilderness held sway Mary Magdalene is often shown as a scantily clad woman with long flowing hair doing penance in the wilderness.  Looking at this painting you might think that this is how Caravaggio shows her, but, actually, this is almost certainly not the case.   True, her shoulders are bare and her long hair hangs loose.  But the way her eyes and mouth are almost closed, and her hands are clasped suggest a powerful inner experience.  There is a bright red cloth enfolding her lower body.  When you compare this painting to the way Caravaggio shows some of the great male saints, you begin to recognise that his intention is to show a saint undergoing an intense spiritual experience.   The first clue is the raking light which picks out the saint against the dark background.   The second is the red cloth.   In the artist’s works the same cloth is worn by St Jerome and by St John the Baptist.  In his Assumption of the Virgin it is draped high above as if to suggest heavenly glory.  In his works the red cloth is not the mark of a woman of ill-repute:  it is the garment of sanctity.   Her posture, the loose hair, the closed eyes and parted lips are all there to suggest spiritual ecstasy.    So in this painting, Caravaggio is rejecting the wide-spread tradition about the life of Mary Magdalene after the Resurrection that cast her as the penitent woman in the wilderness.  In Caravaggio’s day Mary Magdalene was an important saint for several reasons.  For one thing,  she belonged to “Golden Age” of early Christianity, upon which many champions of the Counter Reformation laid a renewed emphasis.  Secondly,  tradition said that she ended her days as woman doing penance for a wayward past life, and so institutions, which in one way or another sought to “reform” women who had sinned in a sexual way,  were dedicated to the Magdalene.   But Caravaggio’s treatment of the saint in this painting  is quite to the contrary.   Compare this painting to his well-known conversion of St Paul, for example.  St Paul lies on the ground, and is illuminated by this same mysterious light shining out of the darkness. His eyes are closed and beneath him we see the same red cloak.   Two of Caravaggio’s biographers mention that he painted a Magdalene and an Emmaus scene during the months he spent in the Albans Hills after fleeing Rome.  The Emmaus scene is now at the Brera in Milan.  The original of the Magdalene was generally thought to be lost.   However, many copies which were made by his followers and so it must have been quite influential. Caravaggio’s new way of showing a female saint in spiritual ecstasy gained currency in Italy and indeed in Baroque art.   Bernini’s “Ecstasy of St Teresa” (1647-52) is a famous example.   In 2014 the art historian and expert on Caravaggio, Mina Gregori (b. 1924), identified this  painting of the Magdalene as a lost original.  What we see isn’t a repentant female sinner but as a woman of great and unique holiness.