CIMA’S CHRIST AMONG THE DOCTORS 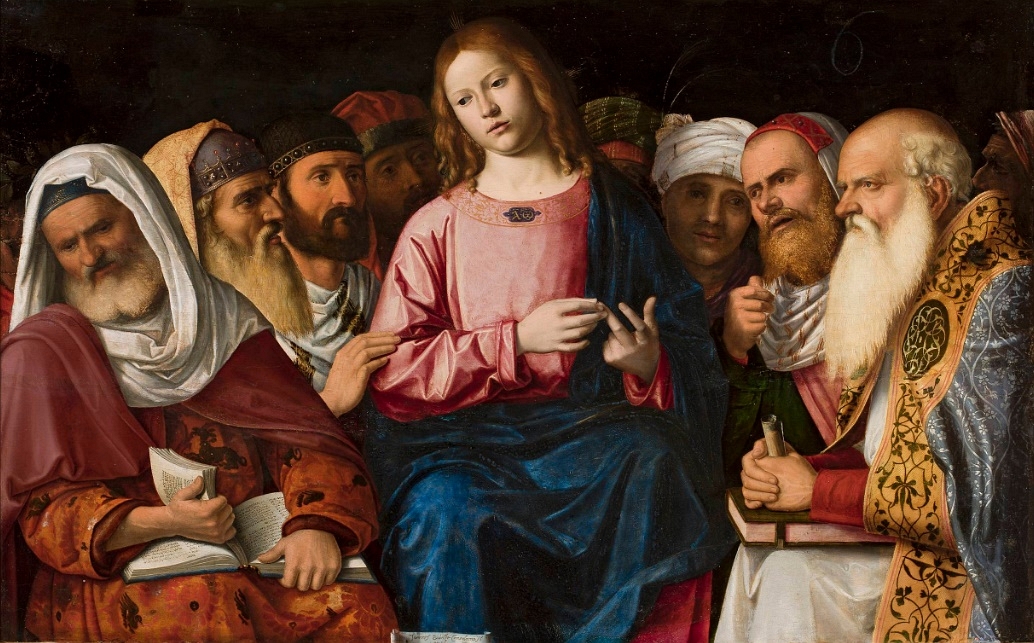 The scene is from the Gospel of Luke when the 12 year old Jesus is separated from his parents in the Temple.  After three days Mary and Joseph find him in the Temple, “sitting among the teachers, listening to them and asking them questions” (Lk 2:41-51).  Luke comments that “all who heard him were amazed at his understanding and answers”. In this painting, the artist, Cima, has left behind Mary and Joseph, the teachers, and even the Temple, to focus is on Christ as Eternal Wisdom. The first and last letters of the Greek Alphabet, Alpha and Omega, appear on the neckline of Christ’s tunic and are a reference to the Book of Revelation where  God declares: “I am the Alpha and the Omega, the beginning and the end.” (Rev 21:6).  To the left a scholar leans away grasping the pages of his book. Is he about to rip them from their binding?   Next to him is a veiled Hebrew scholar who touches Christ’s sleeve.  On the other side the man in front could be a Doctor of the Church. He rests his own writings on a book that might be scripture.  The man behind wearing a turban looks like a Turkish Imam.  In the shadows, both Virgil and Dante are just visible. These were added later by someone to underline the message that in Christ alone is the seat of Wisdom.  Such an image would have been intelligible to a Christian in the great trading hub that was Venice in 1504.  At the Easter Vigil, the Greek letters Alpha and Omega will be traced on the paschal candle as these words are proclaimed: “Christ yesterday and Christ today, the Beginning and the End, the Alpha and the Omega, all time belongs to him, and all the ages, to him be glory and power through every age and for ever. Amen.”  This Lent may we learn to walk in the light of his wisdom and grace.

CIMA’S CHRIST AMONG THE DOCTORS