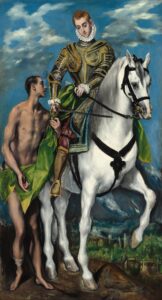 every age. It is an inspiring story. St Martin was a Roman soldier in the

fourth Century. He was stationed near Amiens in Gaul, when one winter’s

day, he came upon a beggar who was shivering from the cold, so he divided

his cloak in two and gave half to the beggar. Tradition says that afterwards

cloak he had given to the beggar. St Martin converted to Christianity and

became its champion, becoming the Bishop of Tours.

After his death, devotion to the saint spread quickly and he became

an exemplar of charity, chastity and piety. Of all the images known to me of St

Martin and the beggar, I think that this one by El Greco is the most beautiful. It It

was commissioned for the Chapel of San José in Toledo. This painting was

commissioned by Martin Ramírez for his family chapel. No doubt he wished to

include an image of his name saint and aspired to the saint’s virtue. The image is

his side would have towered over the viewer. Below them is a view of Toledo. St

inlay, which not only alluded to his previous occupation but also to the life of

virtue to which he was converted on that day.   The other half of

the cloak ,or cappa, which St Martin retained was preserved as a relic and armies

carried it into battle. The temporary structure built to house the relic on the

cappellani, from which we get the english words ‘chapel’ and ‘chaplain’.