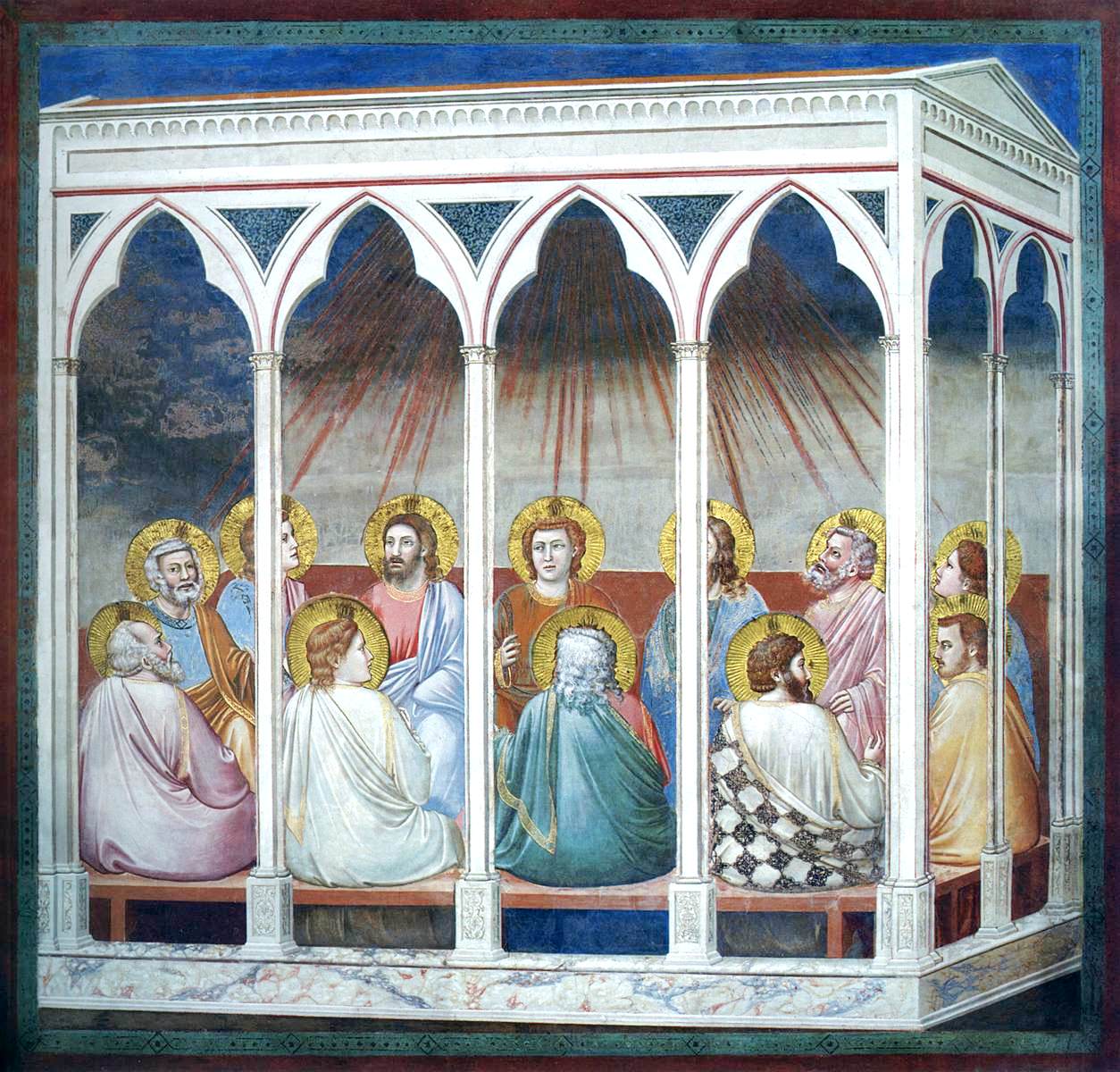 Giotto frescoed the walls of the Scrovegni Chapel in Padua with 38 scenes drawn from the life of Christ, the Virgin, and her parents, Joachim and Anna.  He arranged them in chronological order, so that, scene by scene,  the viewer can follow the story which begins with Joachim and ends with this scene of Pentecost.  Some writers have commented that this final scene is “less interesting” that those which precede it.  To be fair, the expression of intense emotion, which is characteristic of the series as a whole,  is by comparison rather muted here. But this ending is no “damp squib”, rather it is intended as the beginning of a new story.  If you were visit the chapel and follow the narrative  from one scene to the next, you might notice something.  Each scene is populated with various characters, some of which are secondary to the event being illustrated, but whose reaction to that event is visible on their faces or by their gestures.  But none of them look at you.  Their focus is on the story unfolding within the fresco.  And while this is true of most of the Apostles in this Pentecost scene, it is not true of St Peter.  Seated on the left, he alone beholds the chapel visitor.  The viewer is no longer a “third party”, as is the case in all the preceding scenes.  The Last Supper in the upper room is shown directly opposite this scene.  The Apostles sat at the same table for the last supper, but the upper room is transformed.  An open space under a canopy has become a church-like structure, which seems to project out from the wall into the viewer’s space. With its open lattice of gothic arches, it must have looked like a lantern when light made the now dull rays and the halos shine out. St Peter, who was nicknamed the rock, looks at the viewer who has followed the whole story from the beginning as if to say, “like living stones be yourselves built into a spiritual house, to be a holy priesthood, to offer spiritual sacrifices acceptable to God through Jesus Christ” (1 Peter 2:5).  Others have noted the singularity of St Peter’s glaze.   Some quote C.K Barrett who wrote: “In Luke’s thought, the end of the story of Jesus is the Church.”  And so, this final fresco, puts before us an amazing truth, that despite our unworthiness, by baptism, we are made part of Christ’s story and enter into his Life.