Jacopo Bassano’s Adoration of the Kings 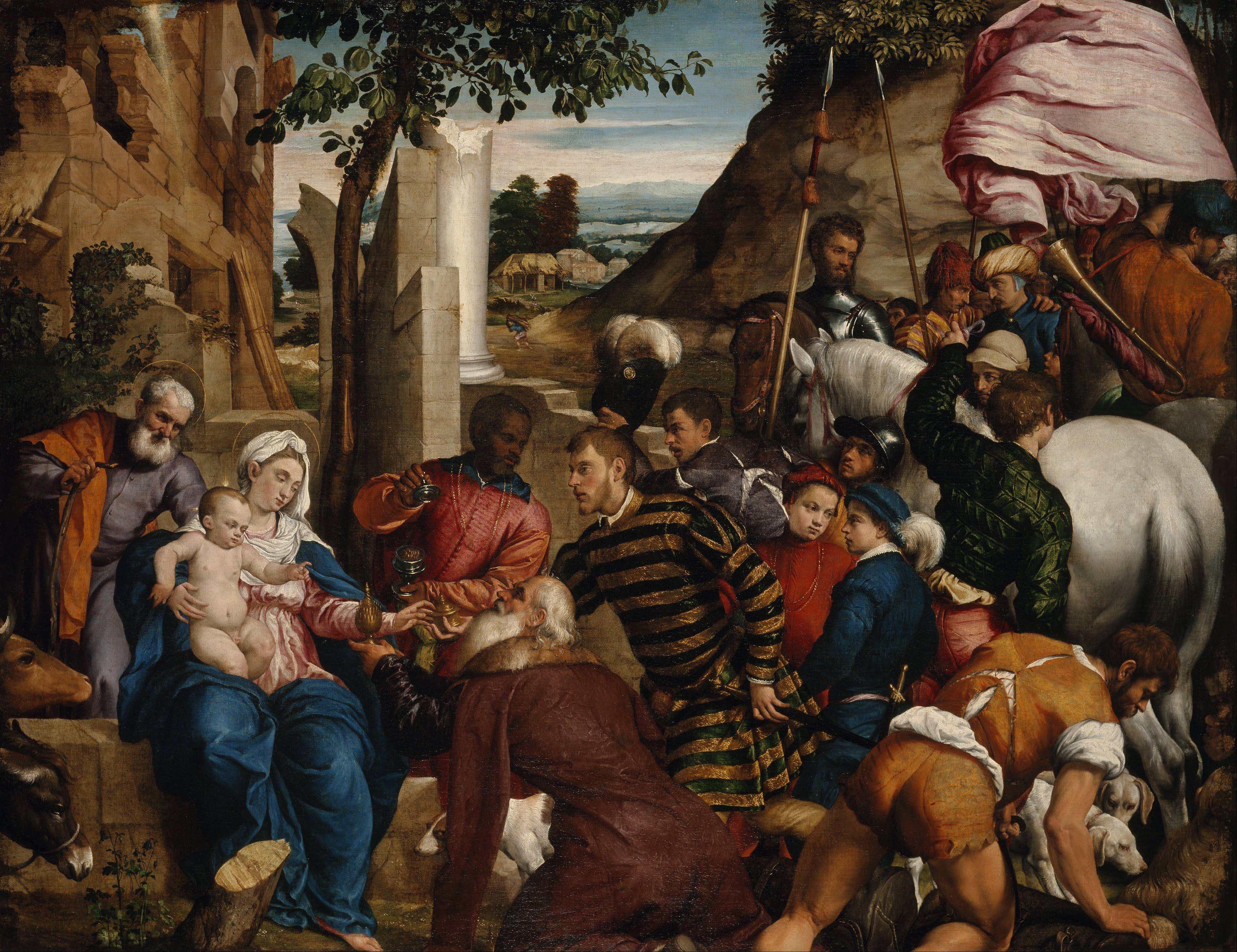 “The Adoration of the Kings”, Jacopo Bassano, 1542, National Galleries of Scotland.

On Friday I went down to the National gallery to look again at this painting because Epiphany is all about seeing the unseen. It really is beautiful. The whole canvas is full of people, and I drew an imaginary line down the middle and noted that almost the entire named subject, that is the holy family and two out the three kings offering their three gifts and even the beam of light from star above, are packed into the left half of the canvas.  The other half is given over to a crowd of people who seem largely indifferent to the Virgin and Child.  Many see it as a division of three; on the left the holy family, then those of faith in the middle, and on the right, those who are unbelieving.  But those on the right belong to the retinue of the kings and have travelled far and cannot be indifferent. Looking at the painting again, it items to me that  this group are not unbelieving atheists. They are too taken up with their tasks, and they simply don’t see it -as yet.  The Feast of Epiphany is about that moment of seeing the presence of God in this life: it moment in time when the One who is eternal reveals himself to us. This is why I wanted a second look.  The most striking figure in the whole scene is not the Christ Child or the Virgin, but the youngest of the kings who stands upright exactly in the middle of the canvas. He is unlike the other kings. He alone wears cloth of gold and he is positioned so that our imaginary line cuts right through him. As he looks towards the Virgin, his handsome face is at the exact centre of the canvas. Is this painting really about him?  Bassano has followed established conventions about how the Magi should be represented.  But clearly this is a portrait.   It wasn’t unusual to portray individuals as the kings.  Whoever this patrician was, we can see that he had exquisite taste in clothes. His garment of gold and emerald green is perfect for someone with his colouring.  But it is his dignity and nobility which holds the viewer.  He is like a courtier being granted an audience with some royal personage.  He stands at a slight distance from the Virgin and Child and bending one knee, with one hand on the hilt of his sword, he holds out the other with his gift for them.   He almost touches the hand of the Virgin and in the way their hands meet, there is a trace of Michelangelo’s “Creation of Adam” from the Sistine.  We can see that the the African king has brought the gold. What gift does our king bring? I think it is myrrh; the gift given in preparation for the suffering and death to come.  Who was he?  A ledger records a deposit paid for this painting in 1542 by a Jacopo Ghisi, but Bassano returned the money before the year was out and yet the painting got finished, presumably for someone else.  Bassano took the  composition from a fresco in the Duomo of Treviso by Pordenone.  It is on the side wall of a funerary chapel.  Was this painting intended to adorn this young man’s grave? Notice the tree stump just below the Virgin and Child.  It is a standard reference to the passion. But if you look closely you can see that this tree was hacked at with some force and roughly.  On the other side of the Virgin a fig tree grows tall, but it too has been damaged.  Something has pierced its bark.  Beside the roughly cut tree stump, a delicate aquilegia has grown from the earth and blossomed.  For me at least this painting is like a prayer for the young man, that by the merits of whatever it was he suffered in this life, he would reach the heavenly court and, that having arrived at last,  his reward will be great in heaven.

Jacopo Bassano’s Adoration of the Kings