PALMA IL VECCHIO: THE ASSUMPTION OF THE VIRGIN 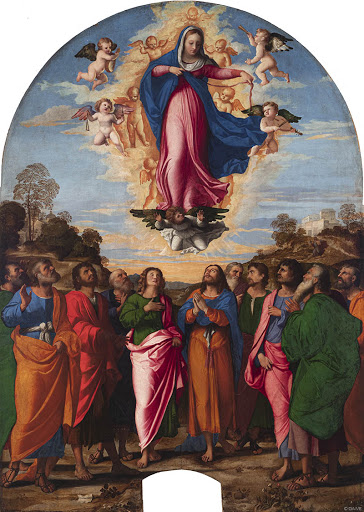 Although not mentioned in the New Testament, there is strong tradition that the Apostles were gathered together miraculously to witness the Assumption.  One tradition also says that St Thomas, who was not there when the Risen Jesus first appeared to the Apostles was also too late to witness the Assumption and that he refused to believe until suddenly the girdle that had encircled the Virgin’s body fell into his hands, and he realised that the Blessed Virgin had really been assumed into heaven, body and soul.  The Virgin  gave him her girdle so that he would believe.  In this picture, you can see the Virgin being assumed into heaven and she  is about to drop the girdle earthwards.  St Thomas can be seen running down the path just below the hill top town on the right.  The legend of the Donation of the Girdle was very popular in Northern Italy and the girdle itself was preserved as a relic in Prato.   Other artists showed St Thomas kneeling on his own before an apparition of the Virgin. She is surrounded by cherubim and she drops the girdle earthwards.  Why Palma il Vecchio would combine the two episodes and show Thomas running has not yet been explained.   And yet to modern eyes there is something quite charming and even humorous about the detail.  Notice that the Virgin does not look towards heaven but towards the Apostles, who are now in her care.   And it is as if she is waiting for St Thomas to arrive.   To my eye at least, the Virgin herself looks rather bemused at the late-comer!  Ponder this the next time you are late for Mass!

PALMA IL VECCHIO: THE ASSUMPTION OF THE VIRGIN