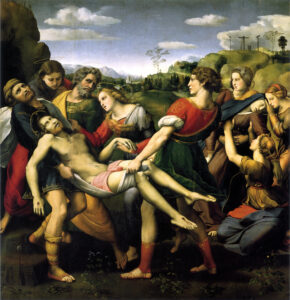 “Entombment”, 1507, Raphael, Borghese Gallery, Rome.
Christ is being carried to the tomb, which is a dark cave on the left.  The figures in the procession fill the middle section on the painting.  We can sense their close interaction as they  carry his body.  A later artist such as Caravaggio might have shown the figures at half length to achieve this same effect.  It is as if is the viewer is standing near the tomb when the procession arrives.  A number of strong diagonal lines add to the work’s impact on the viewer. For example, the “V” created by the arms of those who carry the dead Christ gives a strong sense of how they are struggling to bear the weight of the body.  The diagonal line of the dead body is matched by one formed by the body of Mary as she collapses into the arms of her companions on the right.  This powerfully focuses our attention both on the dead son and the mother’s grief.   The painting was commissioned as an altarpiece for the family chapel of the Baglioni in Perugia.  The Baglioni were lords in Perugia and also mercenaries. In July 1500, Grifonetto Baglioni was involved in an attempt to murder other members of his family as they slept.  When he returned to his home,  his mother, Atalanta Baglioni, refused to let him in.  Soon afterwards she changed her mind and followed him,  only to witness his murder at the hands of Gian Paolo Baglioni, who had escaped the onslaught.  Seven years later Atalanta commissioned this work in memory of her dead son.  It is thought that he is  the young man just to the right of centre, carrying the dead Christ.  He looks directly at the tomb.  As we pray for our dead during this coming month of November,  we should remember also those who mourn them.
RAPHAEL’S ENTOMBMENT