THE GOOD SHEPHERD FROM THE CATACOMBS OF PRISCILLA 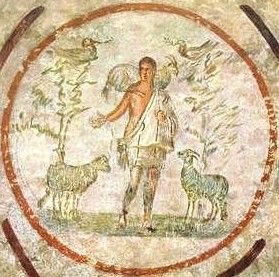 This fresco was painted on the ceiling of a burial chamber in the Catacombs of Priscilla in Rome.  It is not hard for us to see that the man at the centre is intended as the Good Shepherd from chapter 10 of John’s Gospel and the parable of the lost sheep, which is found in the Gospel of Luke (Lk 15:4-5).  The image of the Good Shepherd has a strong association with the hope of an afterlife, and not just in antiquity.  Think of how often the 23rd Psalm is chosen for funerals in our time.   From about the Third Century images the Good Shepherd carrying a sheep on his shoulders were to be found in Christian burial sites. However, their appeal was far wider than Christianity and, in fact, predated it.  In the classical world, the shepherd with his sheep symbolised the peace and tranquility hoped for in the afterlife and it was common in Roman burials.  Carvings of the athletic young man bearing a sheep on his shoulders were used as a votive offerings to the god Hermes, who it was hoped would carry the dead to the after life.  It is evident that these early Christian artists worked with an existing array of visual symbols, but in which Christians could now recognise deep truths of their faith.  The man in this image is shown with birds and animals in a pastoral scene and with pan pipes at his waist and might be understood as either the god Hermes or as Orpheus, who was also associated with the afterlife.  For the Christian artist, this shepherd  is not intended as an image of Christ but as a symbol of the truth that Christ is the Good Shepherd (Jn 10:14).  However, I think this image has another layer of meaning.  It points also to another passage which has a bearing on our faith in resurrection.  This becomes evident when you notice that while to the shepherd’s right there is a sheep, to his left there is a goat.  Surely this alludes to the final judgement scene from Matthew: “Before him will be gathered all the nations, and he will separate them as a shepherd separates the sheep from the goats, and he will place the sheep at his right hand, but the goats at the left” (Mt 25:32-33).  At the same time, this shepherd also carries an animal on his shoulders as in the parable from Luke, except that the animal he he bears is no sheep.  It is quite definitely a goat!  Luke’s parable concludes,  “Just so I tell you there will be more joy in heaven over one sinner who repents than over ninety-nine righteous persons who have need no repentance” (Lk 15:7).

THE GOOD SHEPHERD FROM THE CATACOMBS OF PRISCILLA