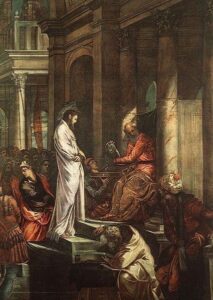 Christ stands before Pilate, wrapped in what looks like white shroud.  We can see that his hands are bound with rope.  As in Matthew 27:24, a servant is washing his hands and he will declare himself innocent of Christ’s blood.  In contrast to Christ, Pilate is dressed in red and seated him between two marble pillars which are flecked with red, as if smeared with blood.  Although Christ is the prisoner,  he is shown as a tall slender figure who seems to loom over Pilate, who is looking away.   When people enter the Sala dell’ Albergo at the Scoula di San Rocco, this painting will be on the wall behind them.  Tintoretto’s enormous crucifixion scene covers the entire wall before them.  However, on turning to leave this pale figure of Christ catches the  eye.  This wall has three scenes from the Passion.   As you face the door,  this scene with Christ before Pilate covers the space between the central doorway and the side wall on the right.  On the other side of the door,  Christ is shown carrying the cross and over the door there is an  “Ecce Homo”.   Clearly, the viewer is meant to see these three paintings in relation to the “Crucifixion” which was painted first.  But the paintings are huge and the space relatively small, so that they can’t be seen at once.  The viewer must turn from one painting to the other and back again.  In fact, Tintoretto suggests this by including two prophets between the side windows, one of whom looks towards the crucifixion while the other looks to the entrance wall.  The elaborate architecture behind Pilate is painted to look as if it were continuous with the side wall.  Its ornamentation evokes the power and wealth of Rome,  but the artist leaves it mostly in shadow.  By contrast the pale figure of Christ catches the light and is the focus of the painting, suggesting to the viewer a different kind of power, authority and kingdom.