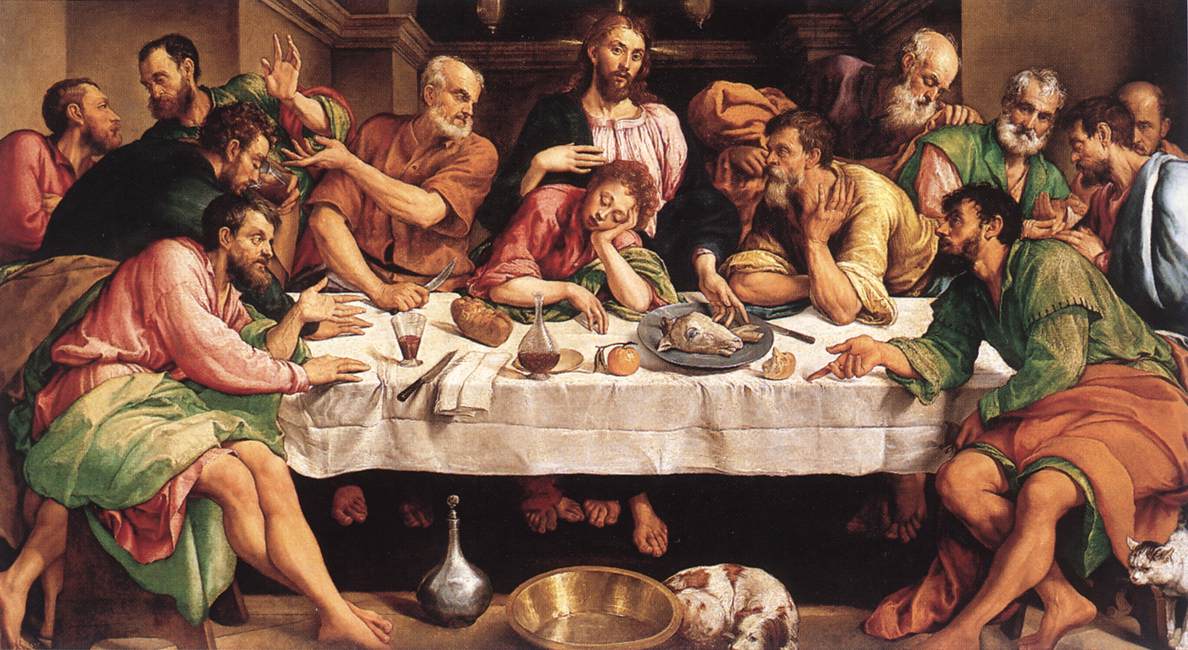 At the Last Supper Jesus washed his disciples feet and then revealed who it was would betray him.  The disciples bare feet are hard to miss and they really do look as if they have been thoroughly washed.  Jesus stands at the centre. His outer garment covers only one shoulder, suggesting that he might be putting it back on,  having removed it to wash their feet.  Bassano shows a scene of consternation between the Twelve as they crowd around the table in a rather confined upper room.  Contrast it with Leonardo da Vinci’s famous fresco in Milan of a century before, which shows a spacious upper room with windows opening on to a sun-filled world.   Here the room is small and cramped without any windows.  Moreover, these are twelve very ordinary fishermen. They lack the statesman-like decorum of Leonardo’s Twelve.  The disciples gesture to one another as their facial expressions vary from bewilderment to what might be looks of accusation. Noticeably, not one of them looks directly at Jesus and he looks straight ahead at us.  Apart from the sleeping figure, who is obviously the beloved disciple, it is hard to identify the rest.  But on the left there is a figure in a dark cloak.   He  is the only one drinking wine.  He looks at no one, but stares at the table, lost in thought.  Is this Judas?  We don’t know , but perhaps we are not meant to know.  The identity of the betrayer is yet to be revealed.  This may be why the figure in the dark garment is not engaging with the others.   In the centre on the floor is the bowl of water.  It may have been the vessel used by Jesus to wash their feet but, if it was, the water in it is clear.  Above it is a carafe of wine.  The carafe is placed at the very edge of the table. In such a crowded space, it could easily be knocked over.  Should this happen, the wine would pour directly into the bowl of water beneath, making it resemble the blood and water that will flow from the side of Jesus on the cross, signifying the sacraments of Baptism and Eucharist.   In this very natural way, Bassano shows the human situation in which Jesus says,  “A new commandment, I give to you, that you love one another. By this all men will know you are my disciples if you have love for one another. ”  And so another way of reading the painting is to see, the source of the consternation not to bethe identity of the betrayer, but this new commandment.  Bassano’s Twelve are very ordinary men who have been on the road together for a while. No doubt,  as we might say nowadays, by this stage they must have had history with each other.  To love as Jesus has loved them might be challenging.  But hen look at their feet!   They are in great shape, having been washed clean by Jesus.