BELLINI’S ST FRANCIS IN THE DESERT 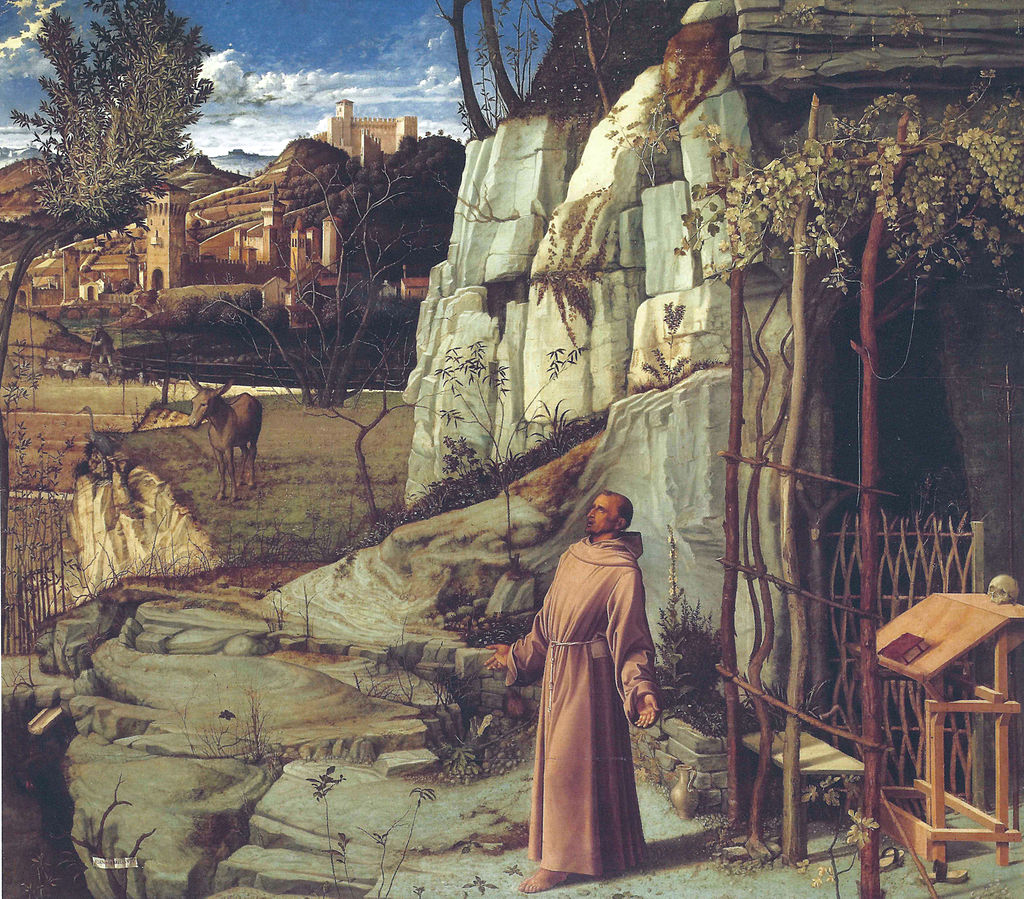 St Francis steps out of a cave into the sunlight.  Perhaps he had come away from the walled town behind to spend the night in solitary prayer in the wilderness.  But now in the light of day the landscape around him teems with life. There is a fortress, a walled town, a river, a shepherd with his flock, a donkey, a grey heron, and almost hidden on the bottom left, a small bird drinking from a spring of water.   Perhaps the most unusual element in the landscape is the tall laurel tree on the left.  When you look at the leaves,  you can see that they are brightly lit and that,  in fact,  there are two sources of light in the scene.  There is the normal light of the early morning sun coming from the left and catching the walls of the fortress,  the town and the donkey in the middle distance.  But the laurel tree and St Francis are lit by a much stronger light. It casts a deep shadow behind the saint. The other worldly light source suggests that what is being shown is St Francis in prayer.   It has been noted that that the rock formation echoes the saint’s posture and that there is a visual sympathy between the figure of the saint and the the landscape.  There is a sympathy also between the way tree bends and the posture of St Francis.   Of course this sympathy for creation  echoes his famous canticle.  Over the centuries symbols of St Francis proliferated and became very complex as Franciscan authors sought to show him as being like certain figures from the Old Testament and, in particular, Moses.   The brightly lit laurel tree may be there to represent the burning bush.  St Francis is barefoot as was Moses who removed his foot wear because he knew he was on holy ground.  The whole landscape may be Bellini’s way of externalising the interior experience of the saint.  The heron and the ass for example are thought to evoke his solitude, prayer and penance.   There is a rabbit looking out from a hole in the rock just under St Francis’ right hand.  Some scholars suggest that the rabbit represents Moses who was silent before the Lord.   Just to the left of the rabbit there is the dead stump of a fig tree which has been cut down, but has now produced a leaf.  Above the rabbit hole a new shoot grows from another cut stump.  Both are sure symbols of the resurrection.  This work serves to remind us of our close relationship with creation and that our Christian faith calls on us to cherish it and care for it.  St Francis pray for our world today.

BELLINI’S ST FRANCIS IN THE DESERT