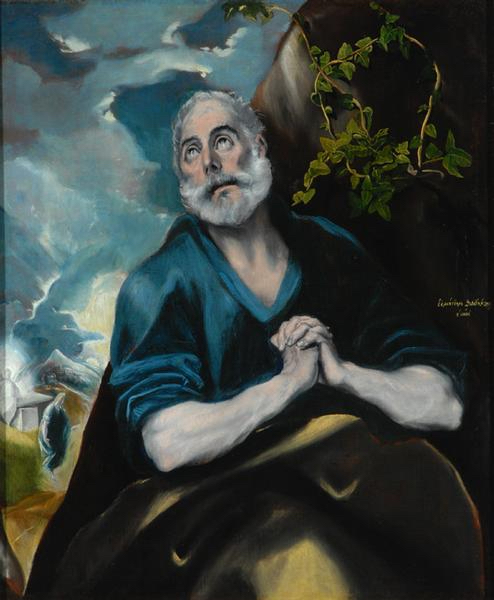 El Greco was one of the first artists to focus on the sorrow of St Peter after he had denied Christ.  He painted this  subject at least six times. This version is said to be his first and best.  It is early on the first day of the week.   The sun has risen and Mary Magdalene is moving away from the tomb. Behind her is the figure in dazzling apparel. She is going to St Peter with news of the empty tomb.  But St Peter’s eyes are full of tears as he remembers his denial. what he has done.  He looks to heaven and prays for forgiveness.  The dark rock face behind St Peter puts his pale skin into relief and lays emphasis on his strong arms, broad shoulders and the stout neck. This is Peter the fisherman.  In the various versions of the subject, El Greco places St Peter against this  this dark rock.  Perhaps we are meant to recall that this is the rock on which the Risen Christ will build his Church.  However, this dark mass also suggests a cave or indeed a tomb.  In this scene, St Peter does not yet know that Christ is risen, nor that the Risen Christ will forgive him and make him the shepherd of the flock.  He knows only his sin and remorse.  The darkness of the rock draws our attention to his tears.  But at the same time, St Peter seems to emerging from that dark place.   Soon, Mary Magdalene will reach him and he will turn and run to the empty tomb.  And then the encounter with the Risen Jesus, from today’s gospel passage, awaits him on the shore of the sea.  But for now, he weeps and prays for forgiveness.  The viewer knows that his prayer for forgiveness will be heard.  The viewer can see that the light of the resurrection has already dawned.