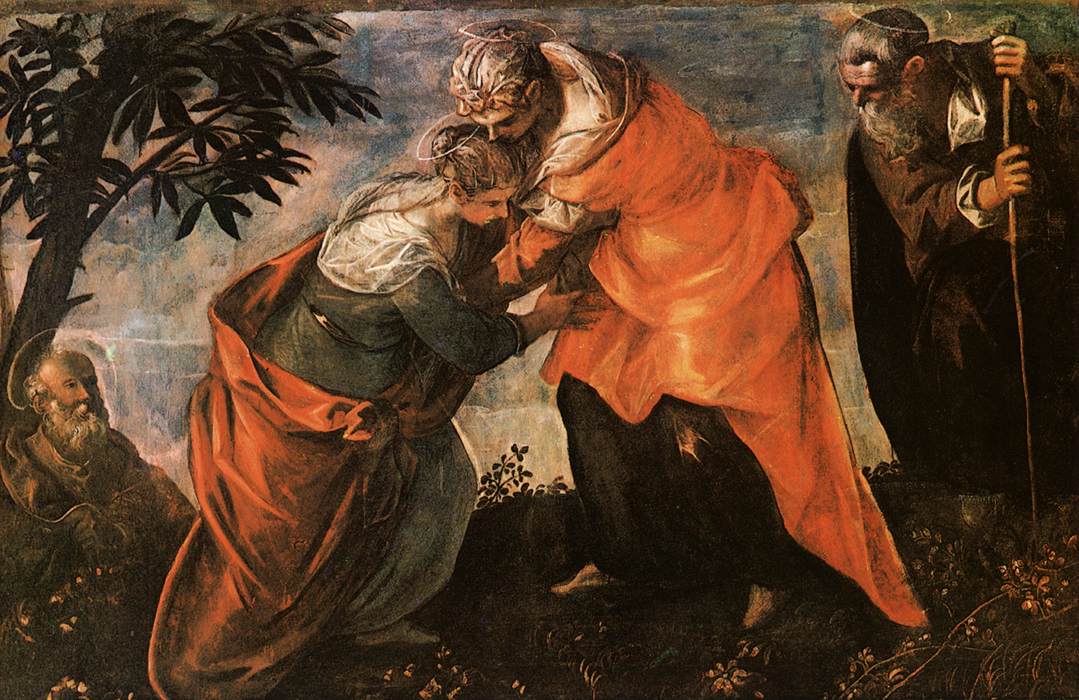 This painting was intended to be viewed from below.  It hangs high up over an archway on the landing of the grand staircase of the Scuola Grande di San Rocco. The Scuola commissioned Tintoretto to paint this “Visitation” to hang near an “Annunciation” by Titian, which had been displayed on the staircase since 1557.   However,  at such a height and with poor lighting it must have been difficult to view.   In the 1930’s this painting was removed for an exhibition and when it was returned to the Scuola, it was displayed at eye-level so that it would be more easily seen.  In 2014 a new lighting scheme meant that this painting could be put back in its original position and now  it can be viewed as intended by Tintoretto and visitors can appreciate the delicate beauty of this scene. The Gospel of Luke tells us that Elizabeth and Zachariah lived in the hill country of Judea.  Mary and Joseph approach from below as though the home of Elizabeth were built on a steep hill.  The four figures are set against an evening sky, but our eyes are drawn to the two women as they embrace each other.  Both are draped in the same bright cloth.  It is orange; the colour of fire.  It is as if Tintoretto has clothed them in the Holy Spirit, which will descends like tongues of fire at Pentecost.  Like a beacon or a lamp, their Spirit-filled embrace blazes on a hill top against the failing light.  In this way, Tintoretto echoes the Old Testament story of  the Burning Bush and also looks forward to Pentecost.  Perhaps it was his intention that as members of the Scuola climbed the grand staircase in the fading evening light, the bright glow of the garments would catch their eyes and they would see and appreciate the joy of Mary and Elizabeth’s embrace.